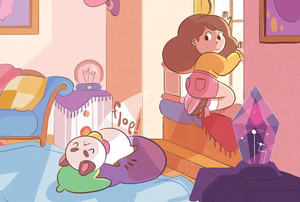 Bee and PuppyCat is an American animated series created by Natasha Allegri. The story started as an animated web series, but also officially exists in several other forms, including a comic book series and various websites.

Bee and PuppyCat the cartoon series began with an animated short created for Too Cool Cartoons! on Cartoon Hangover, a subsidiary of Frederator Studios. It aired in two parts. The first 5-minute episode premiered on July 11, 2013, and the second episode premiered on August 6, 2013. It was written, storyboarded, and co-produced by Natasha Allegri and was directed by Larry Leichliter. Fred Seibert serves as the series' executive producer, with producers Kevin Kolde and Eric Homan. From Cartoon Hangover:

In 2018 after many rumors of a second season coming, Channel Frederator uploaded a trailer for Bee and PuppyCat: Lazy in Space which would air in 2019 exclusively on VRV. Though the season was then delayed.

Boom! Studios released a comic book version of Bee and PuppyCat in 2014, via their imprint Kaboom.[2] This comic series consisted of collections of comics produced by a variety of artists. The comic was originally planned to contain 16 issues by only 11 were released when it was canceled in mid 2016.

Bee and PuppyCat has achieved considerable popularity online, with many fans already creating fan art and cosplays showing their appreciation. It is promoted on several platforms. Some sources publish more Bee and PuppyCat posts than others.

Official Bee and PuppyCat merchandise can be purchased online. Through Frederator's partnership with We Love Fine and Squishable[3], several Bee and Puppycat clothing items and plushies are available. Kickstarter backers received exclusive merchandise as a reward. 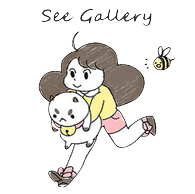 Retrieved from "https://beeandpuppycat.fandom.com/wiki/Bee_and_PuppyCat_(series)?oldid=15262"
Community content is available under CC-BY-SA unless otherwise noted.